It’s been a while since I posted anything new, so today I’d like to share a Grimdark Future batrep that was submitted by tat2artst. There’s always something awesome to reading people’s batreps as they show you how different people play the game.

If you’d like to submit your own batrep for everyone to see just shoot me an e-mail: onepageanon@gmail.com.

Reports of orc scavenger parties sighted in an abandoned imperial industrial sector. A small force of Dark Brothers has been dispatched to clear the area and secure any useful supplies.

Dark Brothers enter from the south, orcs deploy on the north.

The speeder starts its search in the northwest section. The commando orks secure and ammo cache in the centre ruins and the ork helicopter enters from the east.

Since my table is only 4’x4′ the non-scout units enter from their starting edge on the first round instead of deploying onto the field at the start.

At that moment a scouting orc helicopter passes by and sees movement within the ruins, he flies around the corner to investigate. He finds the brothers and fires off his linked missile launcher. The blast is deadly and wipes out 3 brothers.

Battle Brothers team 2 moves to the ruins to give team 1 support fire. The assault rifles only manage to scratch the paint but the plasma cannon nearly destroys the helicopter dealing it 3 wounds.

On the north side of the ruins the Orc Boss mob hears the sounds of a speeder nearby and charges forward, their viscous melee weapons tear through the speeder like paper. The speeder crashes and explodes into a ball of fire.

Back at the southeast ruins the Dark Brothers interrogator charges at the orc helicopter, jumps into the air and delivers the final blow to the helicopter sending it crashing down into the ruins.

The Orc Warlord rushes south toward the sounds of explosions and the sneaky commando orcs remain in the central ruins securing a cache of ammo (objective). 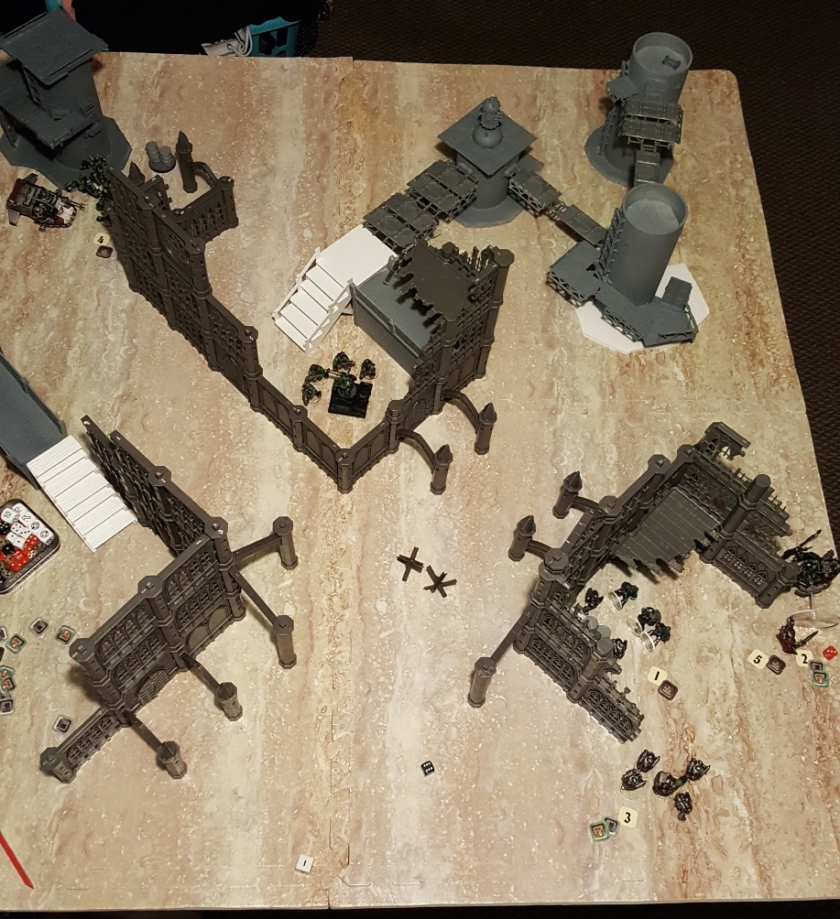 With the southeast ruins cleared team 2 heads towards the centre ruins, unaware of wait awaits them.

The boss mob notices the black smoke emanating from the southeast they rush down the alley toward the ruins.

The interrogator runs through the ruins to assist team 2.

The orc warlord creeps up to the corner of the centre ruins and spots the dark brother interrogator. He sprays him with bullets from his linked carbine but the bullets don’t penetrate the interrogators armour. 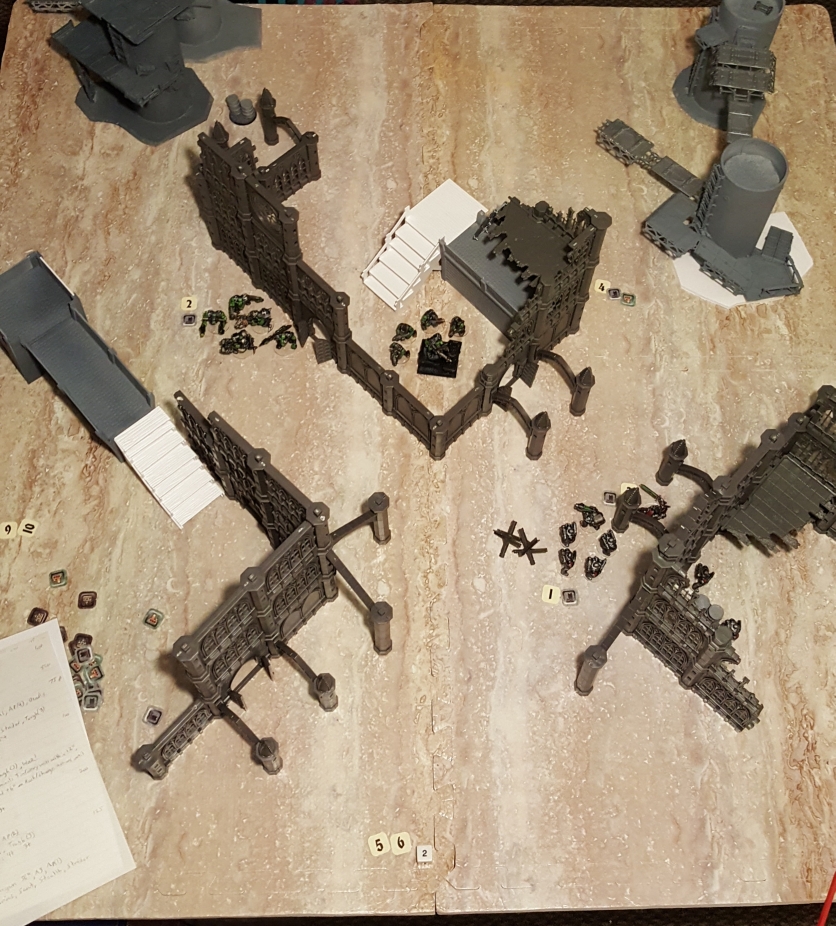 The remaining boss mob continues its charge and reaches the brothers. Their energy swords shred the brothers’ armour. The brothers take three casualties in the assault and strike back wounding 2 of the orcs.

Interrogator charges over to save his remaining brothers striking at the orcs. His energy sword slices the remaining orc in half. 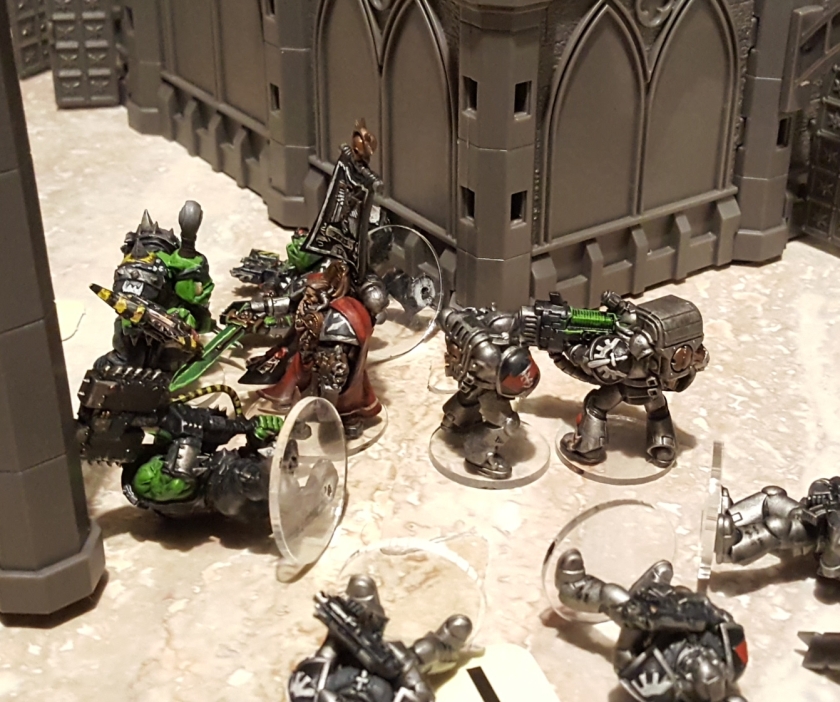 The orc warlord charges around the corner and heads straight for the remaining brothers. He slams his energy fist into them and crushes both of them with ease. 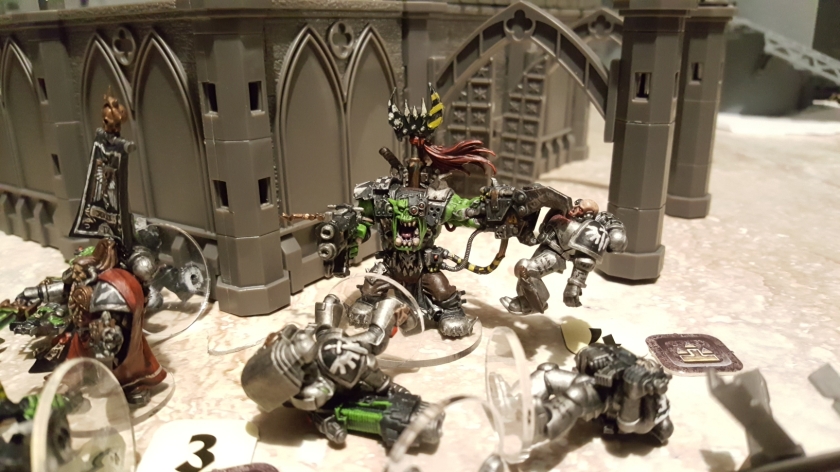 Team 1 positions themselves in the southeast ruins doorway and fires upon the warlord as he rips apart their brothers’ remains. The bullets whiz by grazing his flesh, the warlord barely notices. 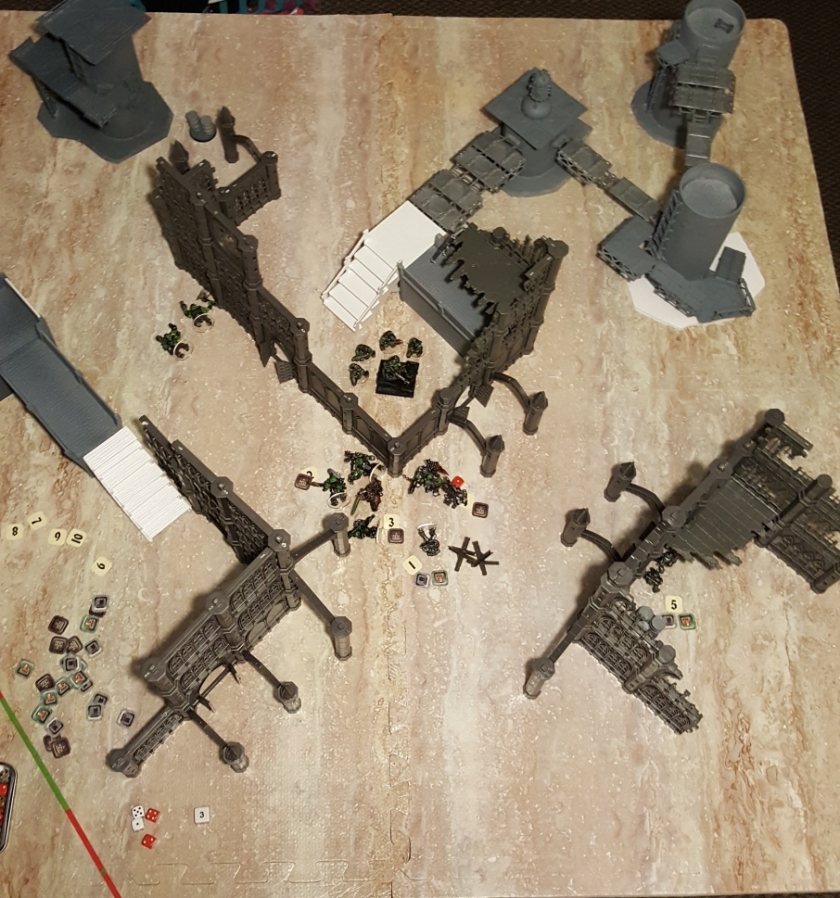 Interrogator turns and faces the beastly orc warlord, he dashes forward and unleashes a flurry of strikes. The energy sword tears through the orcs limbs dealing massive damage. The warlord attacks back striking the interrogator with a forceful blow dealing 3 wounds. both barely survive the clash.

The warlord strikes again crushing the interrogator’s head, his body falls to the ground.

End of the game!

Both sides unsuccessful at claiming victory, the remaining units retreat to gather reinforcements to battle forth in the coming days.