We’re super happy to announce that we’re going to be collaborating with The Maker’s Cult, a small team that’s creating awesome 3D printable miniatures for wargames!

Check them out here: https://www.patreon.com/themakerscult

What does this mean for you? Basically you’re getting a bunch of cool new stuff. :D

The folks at The Makers Cult have an awesome miniature line for the Feudal Guard, which we think fits perfectly into the Grimdark Future universe, so we’ve created an army list for them. 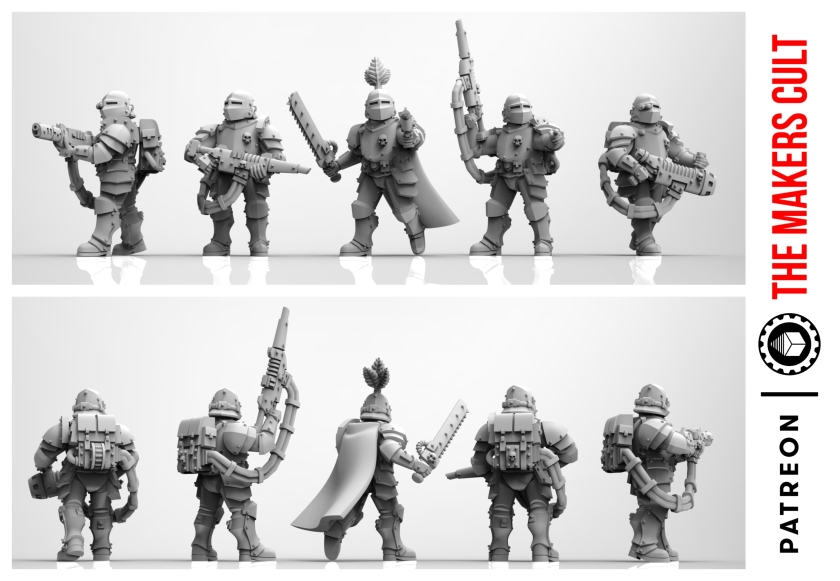 The Feudal Guard serves as a standing army of heavily armored soldiers that pave the way for their bosses so that they can waltz onto the battlefield and take all the credit.

They are tougher than regular HDF soldiers and come with a bunch of fun special rules for you to play around with. Oh, and did we mention that they hate psychics too? :D

Since they serve as a supportive or defensive army that works for the highest bidder we’ve decided to add them to the Mercenaries list, allowing you to add them to your existing army with ease.

Check out the rules for them here:

Here the link to support The Makers Cult again, they have a ton of other models too so you should definitely check them out: https://www.patreon.com/themakerscult

You thought that’s the end of all the cool stuff that’s coming at you?

Skirmish Campaigns – As requested by a ton of people over the years and on the community survey we are finally bringing back skirmish campaigns.

For those that are unfamiliar with them, they are a way to play a series of connected games during which your soldiers gain experience, buy new equipment, take permanent injuries and much more.

The rules also come with a lot of specializations for your heroes as well as with a ton of random events to spice up your games.

AI Rules – Are you having a hard time finding people to play with? Do you want to play coop with your friends? Or maybe you just want to try out a new army list? We’ve got you covered!

With the new AI rules you will be able to play with fully AI controlled armies, which opens the doors to infinite possibilities.

The AI rules cover everything from how to create randomized AI armies, place objectives, deploy armies, and of course play the actual games.

We think this is a huge step for OPR and we can’t wait for everyone to try these rules out.

New Melee Changes? – As with most of the new things that we’re developing we’re constantly seeking feedback and ideas from the community to make sure that our games are as well designed as possible.

Right now we’re heavily discussing ways to re-work the melee rules in order to streamline them to perfection… or at least as close to perfection as possible.

If everything goes well you can expect a variety of small changes to melee and special rules that will hopefully make the game much more enjoyable for everyone.

Available on Patreon right now and for everyone else soon

If you’d like to get access to the Campaign Rules and the AI Rules whilst they’re still being developed both of them are available right now for Patreon supporters.

Additionally if you support us you’ll also have access to our Secret Forum, where you can discuss the new melee changes, campaign rules, AI rules and much more.

If you aren’t able to support us don’t worry though, all of these changes will be released to the public as soon as they’re ready, so everybody will be able to enjoy them for free!

Hope you enjoyed the new army and the preview to what’s coming next, but don’t relax yet because we’ve got some more cool stuff for you from The Makers Cult coming up next week! :)