We’re happy to announce that we’ve completed Wave 1 of our army balance updates and that you can find all of the new files in the respective army folders for each game already.

This was a lot of work because whilst we “only” updated 12 armies some of them had multiple sub-armies inside of them, so we actually updated a whole 20 factions. Then each army has to be updated for both large-scale as well as skirmish, so yeah… 300+ units have been updated and this is only Wave 1. :D

Anyway, enough of the numbers, let’s get to the actual meat of the update!

The army update comes with general game updates, as well as a with one major change for all of our skirmish games: We are switching back to having grouped units act as groups in the game, instead of having them act as individuals.

Whilst working on the patch we realized that whilst it was fun to have every model act as an individual, the games were not designed with that amount of low-cost models being able to act independently in mind. This means that there are a lot of imbalances that are coming out of it that would require us to change the game into a completely different direction, re-work the point calculator, and more.

Since we have no intention to have our skirmish games to diverge too far away from the large-battle games (since we want it to be easy to hop from one game to the other), we are just going to switch back to the old system. Truly this switch is nothing big, just activate those low-cost models as a unit again and you’re good to go. :) 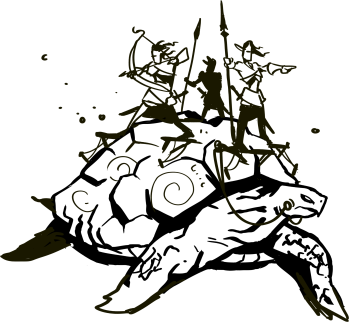 The rest of the changes aren’t that big, but there’s one important thing that we’d like to address before going into them: We’re going to be temporarily removing the Full Color versions of our files and only have Black & White versions for all of them.

As you read above we are working with a LOT of files for our games, and putting everything together we’re dealing with ~100 files right now. Having each of these files both in Full Color and Black & White is adding an insane amount of work to our already busy schedule, and we simply can’t afford to continue having both right now.

This doesn’t mean that we’re getting rid of our new Cover Art or Illustrations, so those are still going to be part of the rules. If you want to save on ink simply don’t print out the Cover Art page from the Full Rulebooks or the first Background Story page from the Army Books.

Currently we’re looking into ways of maybe having dynamic files that allow you to choose between different options with just 1 single file, but no promises on that yet. 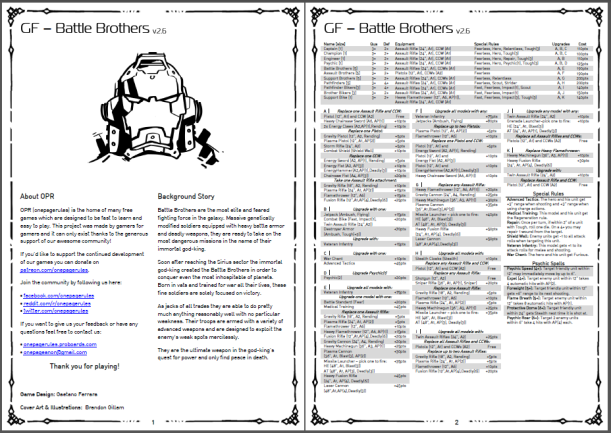 Because we are updating armies in different waves this might lead to some quirky situations in terms of point cost balance or the way spells and special rules work.

The only way to avoid this would be to release all the updated armies at once, but since that might take a long time and we are updating them in order of popularity, we think it’s not fair toward our players to hold on to a finished product for longer than necessary.

We hope that any imbalances won’t be too bad and that we’re going to finish updating all of the armies quickly so everyone can enjoy! :)

Finally here are the patch notes for Grimdark Future.

Here are the patch notes for Age of Fantasy.

Whew, that’s it for today, another huge patch! We’re hoping to bring you Wave 2 in the next 2-3 weeks, so keep your eyes peeled. :)